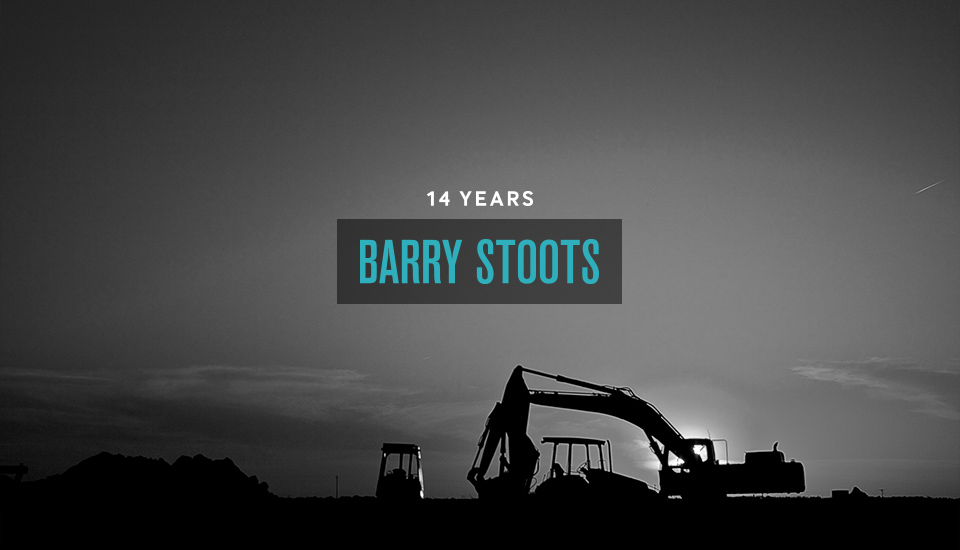 It’s not everyday you get the chance to hire and work with someone like Barry Stoots. When asked what has kept him here so long, he replies, “Loyalty.” Simple as that. This month marks his 14th year at JRF Construction, meaning he has been with us almost as long as we have been JRF Construction, and we couldn’t be happier.

Barry started at JRF as superintendent over some smaller jobs, and quickly felt he had more to offer. He told J.R., “Give me anything. I’ll get it done for you.”

J.R. put him on the Carmel Schwinn building, one of JRF’s biggest projects at the time, and Barry oversaw the project with the dedication and level of quality we’ve just come to expect from Barry.

That quality and dedication means being the first onsite and the last to leave everyday. “I get in, open things up, turn on the power, and make sure everything’s ready,” he says. “If you make a clear path for everyone, projects move at a smoother, faster pace. And you have that time in the morning to think about what issues might come up that day, and what can be done to prevent them, or be prepared for them.”

Which is important when a client comes to you asking to squeeze a 72-day build schedule into 30 days—in the dead of the winter. “We told them it was impossible,” Barry said. But the client was in a jam. It had to be done or risk investment.

Barry still gets choked up talking about it.

“J.R. came to me and he said, ‘We have to try. Whatever happens, happens, but we have to try. It’s that important.’ So we gave it our shot, and somehow, I don’t know how, but somehow, we did it. It almost killed us, but we did it. To this day, we call it The Christmas Miracle.”

And that’s Barry. He does what it takes for the project and for the team to succeed. During the drought of 2012, he even once performed a rain dance in full Native American costume because the water company wouldn’t let us install a water main due to the imposed water restrictions. And you know what, it rained that day. We still hardly believe it ourselves.

Around here, we say that Barry “bleeds JRF red.” The man puts his blood, sweat, and tears into every project he oversees – literally and figuratively. And clients love him for it. We love him for it. So thank you, Barry, for all you have done and all you do. It’s been an incredible 14 years, and we look forward to 14 more.